Bev and I arrived in Managua on October 4 ready to begin establishing a dental clinic in the Barrio of Edgar Lang. We had been successful in raising funds to establish this clinic in honour of Padre Denis Hebert, an Edmonton Archdiocesan priest who had dedicated most of his life in working with the poor in Peru, the Island of St. Vincent and Nicaragua. He had spent the last 25 years working with the poor people of the Barrio of Edgar Lang. Padre Denis passed away in 2015 (for more info go to www.rootsofchange.ca).

Bev and I arrived in Edgar Lang on October 5 and would be staying in the same apartment Padre Denis had lived in for most of his life in this Barrio. It consisted of a small kitchen, small living room and small bedroom and bathroom. He had a nice sitting area outside with a few tables and chairs and great rocking chairs. No air conditioning, but a fan was provided as the average temperature during our stay was 33 C.

Padre Denis had built a medical clinic, pharmacy and lab. It has a full-time medical doctor, pharmacist and lab technician. It is a two-story building and the new dental clinic would be on the second floor. We had to make some minor renovation changes and had storage cupboards built.

As the cupboards had not been finished, we proceeded to go and buy a compressor for our clinic. The University had provided the name of a supplier that we should go to. As we had researched some suppliers in January, we basically knew what we wanted. The compressor we purchased required a surge protector (Managua electricity has varying degrees of fluctuation during the day). The compressor would be delivered that day (it came the day after). We went to two other supply companies as we needed an instrument sterilizer, apex locator (root canals) and cavitron inserts.

The clinic was busy coming together. You learn a lot of patience when working in Nicaragua. You make arrangements to pick up things, and quite often you wait for a couple of hours to for the delivery, but you always seem to get it. Bev was busy sterilizing our new instruments. Oscar (our interpreter) and I would continue going to supply companies, Price Mart, Walmart to purchase things that we required.
When we returned on Friday afternoon, Bev said it was 45C at the clinic and we would require an A/C unit if anyone was expected to work there. The sterilizer gives off a lot of heat during its use, coupled with being 36 C outside, we knew we had to make the purchase. Bev, Oscar and Rafael (our driver) went and purchased a unit and they began installing it that late afternoon. We prepared to go and greet Jim and Ann Thomas who were flying in that evening.

On Saturday morning we picked up the Thomas’ and further dental supplies and equipment and transported it back to the clinic. More sterilizing, more organizing, but we had an A/C unit that dropped the temperature 10 to 15 degrees. During the afternoon, there is another huge rain storm (it is the rainy season)..Really don’t know where all the water goes. At about 4:30 PM we hear banging on our front door. The lady who lives next door, tells us our A/C unit is pouring water into her home. We shut off the unit and Luis Enrique (the head of FUNDACCO, the organization we work with in Nicaragua) tells us they are sending someone over to correct the problem.

We go and check into our hotel which is about 2 km away from the clinic. We have to travel through a number of barricades as Daniel Ortega, the President of Nicaragua lives in the area. There are armed police and special forces at the barricades and other locations patrolling. Our hotel is a small hotel with a swimming pool and a nice little restaurant. Rooms are basic. The hotel is undergoing a major renovation to all the rooms. We will be in the new area when we return in January 2017.

Sunday we returned to the clinic for our final preparation to see our first patients on Monday AM. FUNDACCO will be taking care of registering the patient, making a chart (we have basic info provided on a form designed by Luis Enrique and myself) and will be given to the dentist before we see the patient. They will collect the fees as we charge a fee for each procedure. FUNDACCO stated that we could not charge what we do in the villages as we would have crowds that would be very unruly trying to see the dentist. They did a survey of the surrounding dentist of their fees and came up with a fee schedule that was about ¼ of what the dentist charges. FUNDACCO stated that our patients will be the working poor and they would be able to afford the fees charged. We added the provision that a person who could not afford the fees would still be seen and serviced by the dentist. They also have a program that students in their youth group (they have a large youth group) would have dental services provided for free.

Monday came and we saw our first patients. Oscar, our interpreter’s niece, Rosa, was hired and trained to sterilizer for us. She is in University studying to be a teacher. We also had another girl who was in her last year of Physiotherapy, Criszen, who we also hired and trained as a dental assistant. Both girls we excellent and picked up the jobs very quickly. 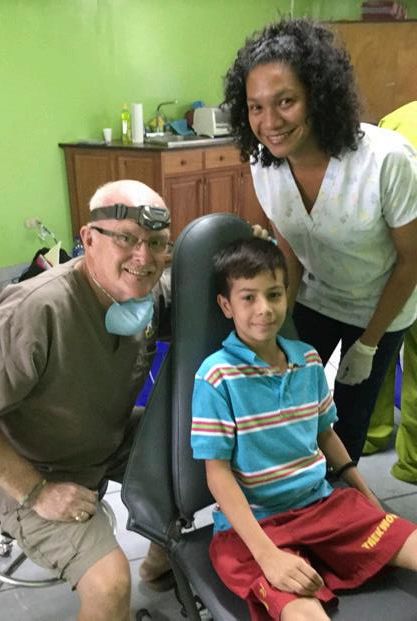 We ran into a few glitches such as me ordering all flowable composite instead of ordinary composite for restorations. I had to make a quick trip to the supply company to purchase composite so we could do restorations. But we were very pleased with the overall running of the clinic. Lunches were provided by a local lady and we ate at the FUNDACCO office just around the corner from the clinic. Meals were usually chicken, fish or cheese with salad, vegetables, rice, gallo pinto (rice and beans) with variations and fresh fruit juice for our drink.
Most patients came in with the usual assortment of requirements, cleaning, fillings, extractions, one endo for Jim. You always remember that one patient and mine was a little 33.5-year-old little girl who came to see us. Of course, she did not want to be there. Few tears, bit of fighting, but mom told her she was having it done. We did our exam and noticed that the 75 had been extracted previously and that she had an abscessed 85, quite badly broken down. The tooth had to be removed. Mom was informed, and we prepared the area with topical. Again some crying, but she kept her eyes closed and her mouth open. I injected and not a peep from the little girl. After waiting for a few minutes for the anesthetic to work, we extracted the tooth. Again a few tears, but quickly stopped. We did our usual bribing, princess toothbrush, a ring and a bouncy ball and she gave me a high five.
What we learned afterwards is when the young girl went to a local dentist to have the 75 extracted. The dentist did it without any anesthesia. You could understand why she really did not want to come to the dentist. Her behaviour was understandable, and given the circumstances, I would say she was an excellent patient. And I feel confident over time her trips to the dentist will be a bit more enjoyable.

We also had a meeting at the Autonomous University of Nicaragua (Managua) with Dr. Oscar Lopez Menses, the Director of Department of Dentistry and Dr. Horacio Joya, the Head of Clinical Dentistry. We were exploring ways that their dental students could come and work at our clinic. They are hopeful that in the future, two or more students under the supervision of a Dentist from the University would come and work one morning (Thurs) a week. We would need to have approval from MINSAC (Dept. of Health) of our clinic. This will be pursued when we return in January. Their Dental Faculty has been in operation since 2009.
We worked for two weeks and due to the hard work of all the people involved, I would have to state our mission was a great success. It showed that the collaboration between FUNDACCO and Dentistry for All which has been a success in our outreach to the villages in northern Nicaragua has carried on to our success in Managua. We look forward to our upcoming missions to Edgar Lang.
Bev and I have our flights booked for January 12 returning on February 12, 2017, to continue our services to the people of Edgar Lang.

You have Successfully Subscribed!